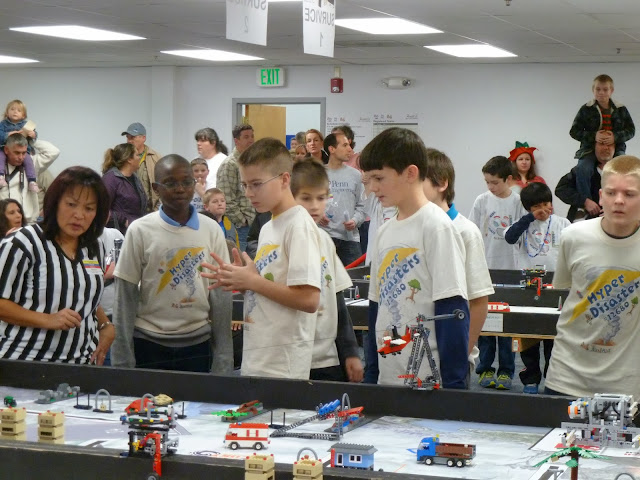 Today was QUITE a day!
We left the house at 7:00 this morning, and had a long competition ahead of us.
Paul, joining his FLL team, the Hyper-Disasters, down the road in Riverside, for the first qualifier of the Lego League season.
I have to say, that at the beginning of the season, I was thinking that Paul was going to be on a team, I was going to go watch the competitions, and when the season was over he would have learned a lot, we would have some great pictures, and a lot of good memories.
For a rookie team, that is usually the most that you expect to accomplish.
For me, personally, I have been feeling so buried in obligations and details, that I couldn't even imagine getting Paul to practice each week. Since Tim is coaching Brendan's team, I thought this would be an activity in which I could be a cheering mom and just enjoy the ride. I just couldn't shake loose any time to really get involved.

Well, I got a little bit involved.
Paul came home and said that they had started their project, and they had some ideas, but were having a hard time getting them to gel. They are all so doggone smart, that I thought that all they needed was a little direction, and they would be able to run with it. I was right.

The judges thought so too...

and here is Round three....


Then we have the awards and closing at the end. Boy, were they surprised when they heard that their presentation had taken first place!

Then they did the presentation in for the whole group!

They were even further over the moon when they learned that out of twelve teams they would be one of two to go to the state competition!

Hi Jennifer. Congrats to the Hyper Disasters! WHAT A DAY! Their project presentation was awesome! I coach the Meadowvale Brainstorm team. Where is your team located? I am submitting the results from Saturday to the patch, and wanted to mention that the Hyper Disasters won first place, and qualified as well. Maybe there would be sometime in January that our teams could meet-up, and share success stories from the robot game to prepare for the state tournament?? Who could I/should I contact?

Loved Paul's response to "Would you sell it to them?" "That depends, what is your stake in the company?"
Brilliant! Great job boys.

Loved Paul's response to "Would you sell it to them?" "That depends, what is your stake in the company?"
Brilliant! Great job boys.