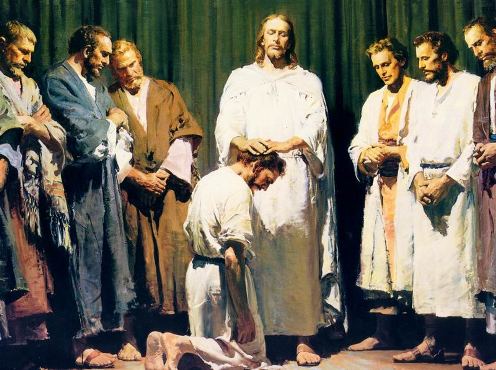 We heard such a wonderful homily today on this Gospel.

Father talked about the beautiful gift that Christ instituted when He appeared to the Apostles and it really touched me, especially on this very special feast of Divine Mercy, in the Year of Mercy.

It's hard to explain the amazing Grace of the Sacrament of Confession. When Jesus breathed on the Apostles, He wasn't just telling them to go out and share His message of Mercy. He wasn't simply telling them that now that He had come, people could ask for God's forgiveness and it would be granted.
He was instituting a special, visible sign for those He loves. He was sending the Apostles out with the ability to call down the Grace of the Holy Spirit, as He did, and to absolve people of their sins, "In the name of the Father, and of the Son, and of the Holy Spirit."

Sacraments are conduits of Grace, physical signs  granted to the faithful by Christ Himself. When we approach Our Lord in Confession, we pour out our penitence and He pours in so much more Grace than the measure of our sorrow. We are filled, touched and strengthened.
We don't just go to Confession to tell another person our sins and receive his blessing and counsel, we go to be touched by God Himself.

If we know we have hurt someone, and we want to show them how sorry we are, we usually try to get together, have a talk, ask forgiveness and maybe even give them a hug or a physical sign of our sincerity. Calling them on the phone or sending them an email might have to be enough if we are far away, or if we don't feel particularly close to them, but if it is someone we love and we are really sorry, we want to have a personal encounter. We want to touch them, and be touched back. The prodigal son went home. He didn't send a message saying he was sorry. He didn't say to himself, "He's my father, it's enough to be sorry. He'll forgive me." He went to his father, and he asked him to forgive him. His father hugged him, he looked at him with love, just as our Father looks at us when we ask Him for forgiveness in the Confessional. Of course He knows our heart, of course, He loves us, and of course it would be enough for Him if we just said we are sorry. But it's not enough for us. The Grace of the Sacrament is waiting there. There is the power and the joy of His presence. There is the touch from our Father that we are longing for.

I love going to Confession. There is a very tangible feeling of Joy in my heart after I have received. Yes, I have gone to Confession again and again, with the same sins on my heart and the firm resolution to amend my ways. There have been times when I was embarrassed to be confessing "that sin" again, but going regularly, and asking for the Grace to overcome it, I realize that somewhere along the line I have stopped falling in that way. I am not doing that anymore. Something else will undoubtedly rear it's ugly head, and I will battle it and by the Grace of God, I will conquer it. It's part of the universal battle that the Church Militant, here on earth, must fight everyday. I am so thankful that God gives me His armor, and His weapons against sin, in the Sacraments.

Some day we won't need the Sacraments because, having come home repentant, we will be taken in His arms, brought into the banquet and there will be great rejoicing because we were dead and are alive, we were lost, but are found.
Posted by Jennifer Merkel at 5:39 PM