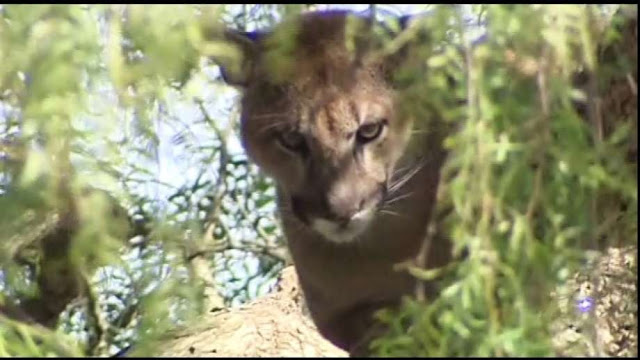 Somewhere I once heard a saying. "If you want to catch a Mountain Lion, all you have to do is turn your back on it."
These wily beasts are notorious for slinking along through the brush, unseen and unheard, and many times the first thing an unwary hiker is aware of is 150 pounds of teeth and claws on their back.
A wary hiker, while the cat is still mostly invisible in it's natural habitat, can pick up clues and may be able to take measures to avoid being dinner. A rustling, a disturbance in the brush, maybe even the flick of a tail or the sight of a tawny coat through the brush, give clues that it would be a healthy thing to pay attention.
The Mountain Lion is a deadly adversary, and if you are in his home, and you don't have the tools to avoid him, you can easily become his vicitim.

There is another adversary, much closer to home, that is just as elusive, just as persistant and just as deadly, and if it is stalking you, you are likely unaware, or only mildly concerned.
This adversary is Autoimmune Disease.

Autoimmune diseases and disorders are now a constant in the world that we live in.
A combination of factors, genetic, environmental, and lifestyle related, can trigger a disorder that can be life-changing and debilitating, and for a large part of the population the signs and symptoms are fleeting and seemingly disconnected.
Odd rashes, pains, sensory disruptions, and "funny feelings" can make the person in the early stages of an autoimmune condition sound like they are more in need of mental health intervention than medical, and truthfully, these conditions are rooted in our systems at the cellular level, so chasing symptoms in the early stages is mostly pointless.
Following symptoms that may occur months, or even years, apart and trying to tie them together into something that may or may not even be on the books yet, is really not an option for most people.

It used to be that we had to just wait to see what developed.
My mom had odd symptoms and seemingly unconnected conditions years before she was diagnosed with Scleroderma, a connective tissue disorder that was rare at the time.
Both of my daughters have been plagued with varied symptoms of autoimmune conditions for most of their lives.
Laura was diagnosed with Crohn's disease as a pre-teen, and recently Multiple Sclerosis.
Nina has so many autoimmune issues that her doctor treats her symptoms, but no actual diagnosis has been forthcoming.
I have had odd connective tissue symptoms most of my life. I really don't want to chase down that lion, so I am just walking as fast as I can and hoping I make it to the trailhead before he pounces.

Until recently I figured it would just be  matter of time before something manifested itself and I learned what I was going to have to deal with and what might eventually disable me. I figured I was powerless to stop it.

Lately, however, I have been reading more and more about inflammation and the effects that it has on so many systems and organs in the body.
The brain, nervous system, GI tract, connective tissues and others are all profoundly affected by inflammation and up until now there just wasn't enough knowlege in the field to empower the person affected.
Inflammation is caused by different factors and some of them are unavoidable. Our bodies respond to things in the environment, viruses, bacteria and many other things by mounting a defense at the cellular level. Sometimes, in some people, the body becomes stuck in an overactive response that is then perpetuated by exposure to things that it has become sensitive to. Things like pollen, certain foods, heavy metals, and stress bring inflammation to a rolling boil and keep it there, damaging cells in the process.

Chasing down the cause, and treating it, can be finacially, emotionally and mentally daunting and sometimes medically impossible, but approaching the effects; working to change diet, habits and lifestyle, may allow those that suffer from autoimmune, and related disease, a new way of being pro-active and slowing, arresting or even reversing the damage.

So, Tim and I are trying the simplest level of this diet: 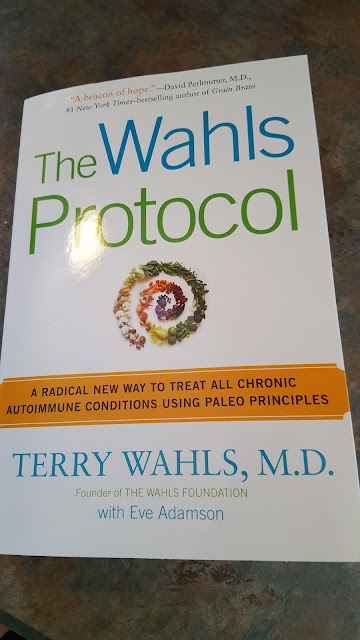 It was developed for people with MS, but it's quite close to many of the diets that are being suggested for people who want to avoid the diseases of aging, like Alzheimer's and dementia. The protocol is based mainly on foods that are high in the nutrients that we need to produce healthy mitochondria, so that our bodies can arrest problematic changes in the cells. The changes are pretty drastic, but the way that we eat in western society is killing us. It just has to be better to eat this diet than to keep eating all that processed crap.
Giving up sugar has been a really tough one for me. I fail frequently, but I am determined. When I do slip and have something sugary, I pay for it for hours. I just feel terrible.
Dairy has been really easy, because I am really not a big fan of it. Almond milk is downright delicious!
Gluten...well, my goal is to beat the first two, eat up the bread and stuff in the house, and then stop buying it. I am quite a bread lover, and that's gonna be a hard one. And there is gluten in so many things!
Adding all the veggies, fruits and other things in is actually quite fun. I have been finding recipes that are fantastic and filling, for things that I never would have imagined I would like.

Knowing that there is the wildcat of autoimmune disease stalking somewhere out there, I am hoping that by cutting out the foods that promote inflammation, adding in foods that encourage cellular health, and maintaining an active lifestyle, we may be able to beat the beast to the trailhead. Maybe we can go into our later years with healthier bodies than we had in the earlier ones.
If this works out the way we hope, we may never know what we missed. And that's just fine.

Posted by Jennifer Merkel at 5:17 PM