Last year, John really started to click with the piano. We have had a nice digital for many years and the boys have all practiced quite adequately on it, and have come along well. We got it because we didn't want to invest in a piano that was just going to sit around in the event that the kids didn't keep playing.
I have insisted that they take lessons and practice, for school, but I wasn't sure whether anyone would really take to it and love the piano for it's own sake.
When John discovered The Piano Guys and heard this song,


I knew that it was going to stick.
I told him that when he had mastered that song we would buy a piano. I initially said that we would get a baby grand, but space and economic limitations quickly became apparent.
So, we modified the plan, but I wasn't too worried, because that song is well known to be one of John Schmidt's most difficult pieces.
I should have known better.
John has a wonderful piano teacher, and he is, himself, inspired by the music.

It was only a few months and he had it down.

So we started looking for a piano, but I wasn't sure, exactly, where the money was going to come from.
We found that even a nice used piano can run in the thousands of dollars, and it can be really hard to know what you are getting.
We went to a few dealers, and found out very quickly that that was not the route we wanted to go. I talked to the boys piano teacher, and she told me about the brands that she likes, and the ones to stay away from.

The money was still an issue.  Tim had been contacted by the state of Washington, regarding a bank account that had been left by his Aunt, years before. We weren't sure if, or when the money would pay out, but the wheels just started rolling like the Holy Spirit was turning the crank! The money was being divided four ways, and Aunt Joanne left our family a little windfall. Just enough. Tim's mom used to play the piano, and he got her one that she loved and played for years. What an amazing thing that this gift of music should come through his family. This was a little miracle, because we have been trying to get our bills paid off and stay debt free, as Tim's paycheck is going to be affected by the sequester. We were thinking that the piano would have to wait. God didn't though.

We haunted Craig's List, and went and looked at a couple that might have been OK but after we thought about it, we just didn't feel like they were right.

I got in touch with a piano technician and asked him if he would help us decide, when we found one, if it was the right one.
So, we narrowed our specifications.
We picked a brand, Yamaha, that is known to be well built and last for years. We watched the ads for this brand, and there were a few, but they were all way out of our price range.
Then one day I saw this:

I forwarded the ad to Mr Grimes, the technician, and he said we should definitely look into it.
I wrote to the people, a very nice couple that are moving out to Palm Springs, and they said to come up and look at it.
We went up last week, and John decided that this was definitely the one.

We made the appropriate calls to the movers and got the room set up, and now John and the boys will be making beautiful music in this house for years to come! 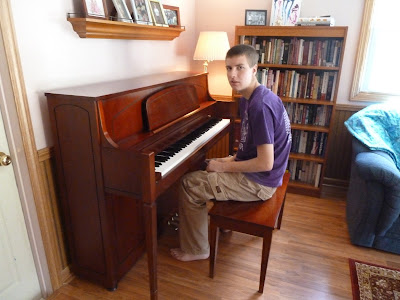 Posted by Jennifer Merkel at 3:54 PM