What will the year ahead bring us? It's always something I think about as we ring in the New Year, but hadn't really had time to dwell on until today. We have been kind of busy.
I do want to post the first few days of the New Year, before they are old, and state my goal to be a better blogger. Maybe this year will be better documented than last.

So, Tim was with us in Texas until the Sunday after Christmas, and it was a very special time. 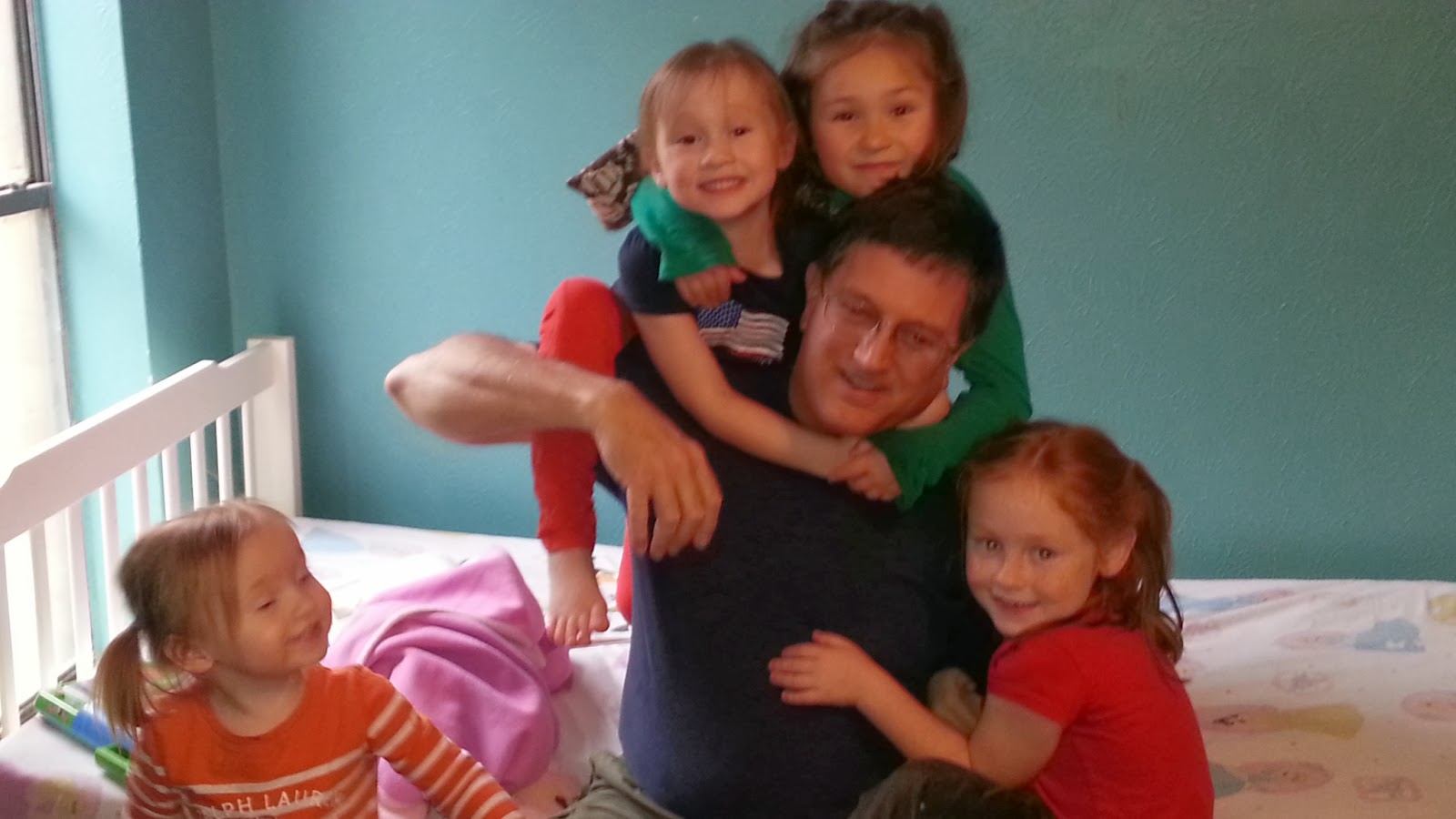 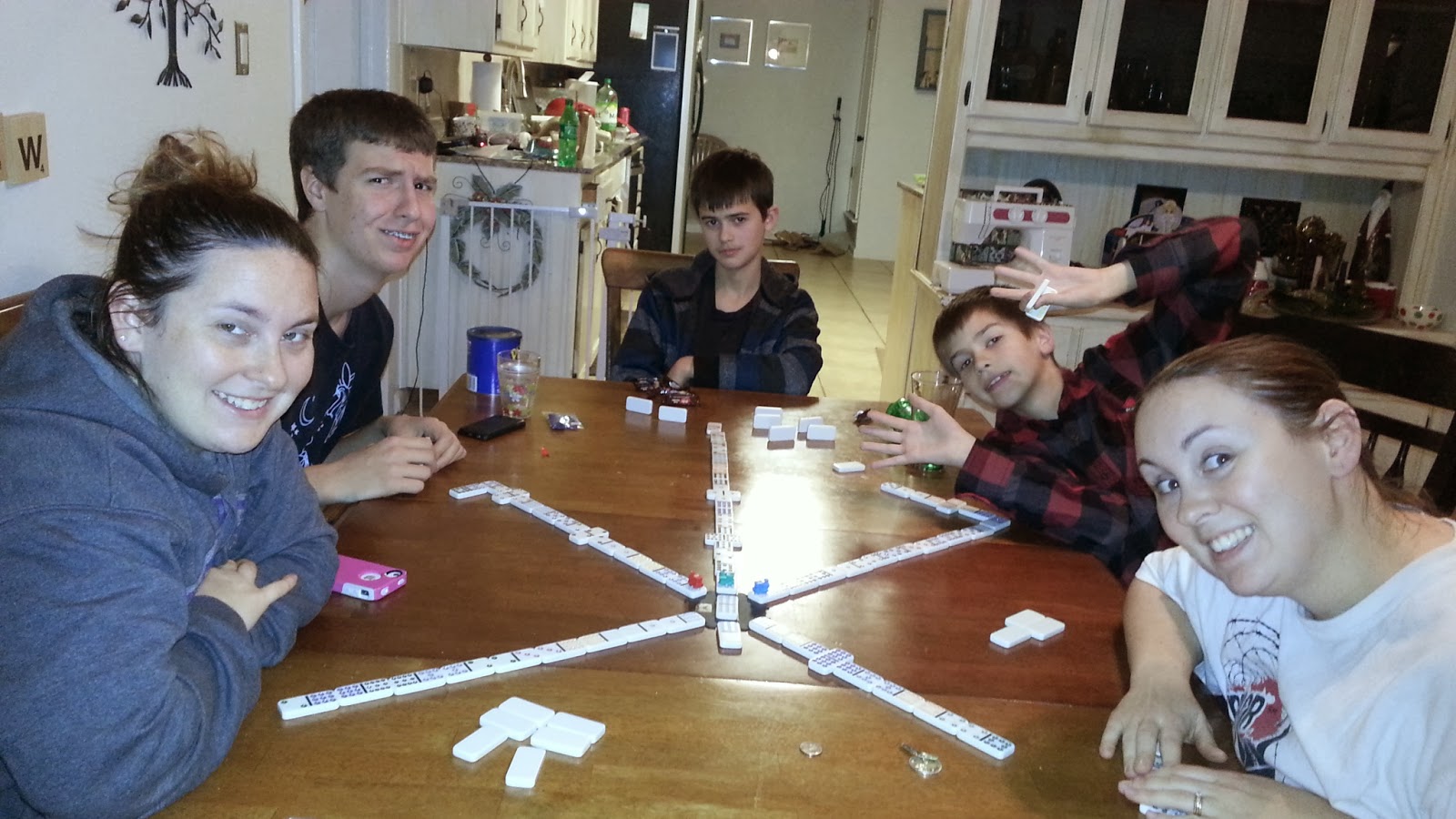 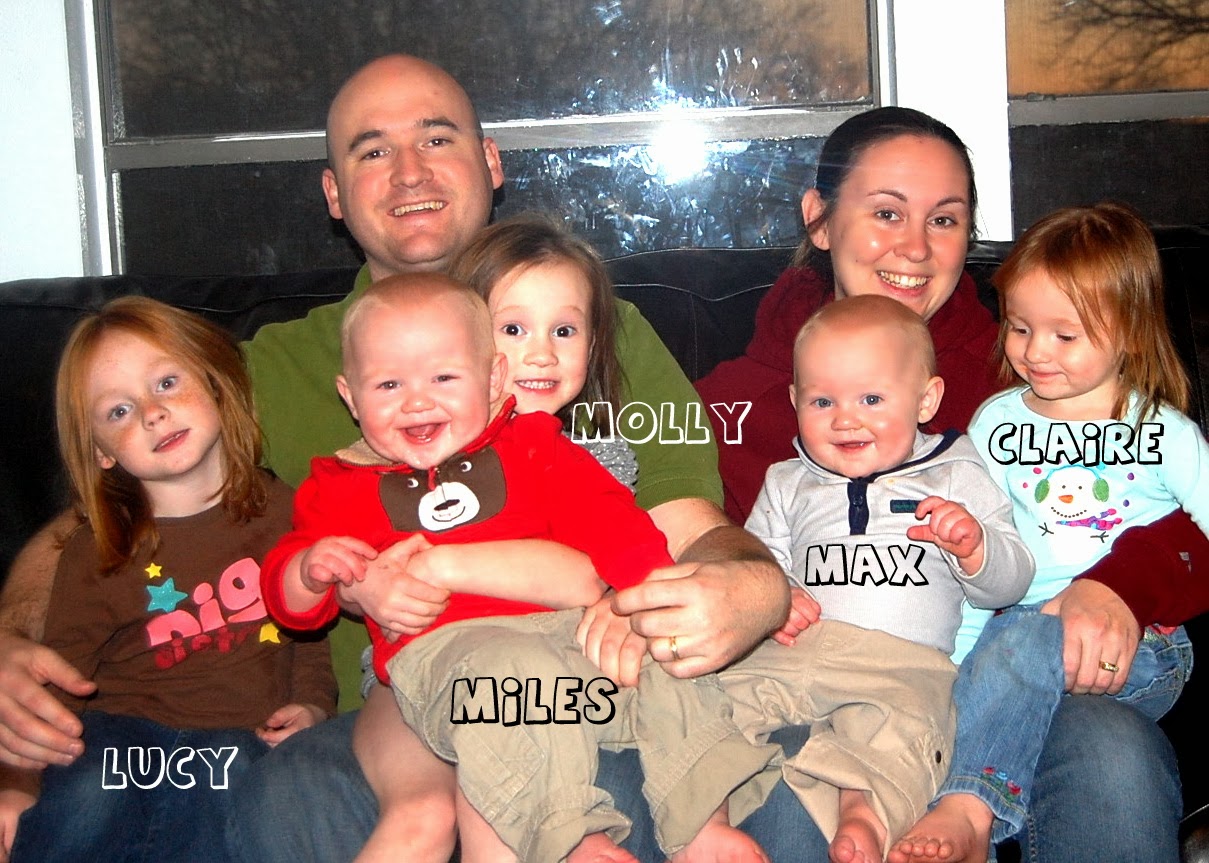 The kids are so sweet and we all enjoyed the time playing and just being there with them. Laura is a very gracious hostess, and she does so well at providing all the touches that make you feel welcome and loved.

For New Years Eve, Andrew and the boys cooked up a "dance-party" for the girls, complete with a strobe light and great music! 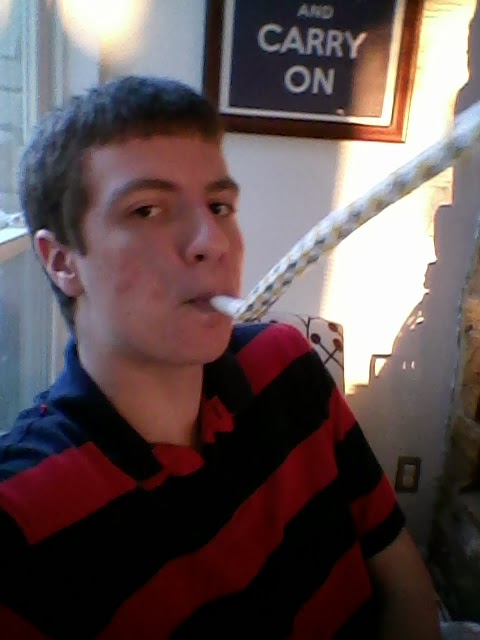 They all partied in the living room while Laura and I watched a movie and crocheted in the family room. After the girls went to bed, the guys all came in and we watched "Batman Begins" which was actually really good!
We stayed up way too late but we didn't have to get up too early because Mass wasn't until noon (we thought).

Oh yes, and Paul had had a stomach virus on Monday. He got it from Lilly, and we were all on the watch as to who would come down with it next.

We packed everyone up and headed over to the church, only to find that there had been a misprint and we had arrived as it was just getting over. There was no evening Mass, so Fr. told us we were dispensed, because we had tried. I had really been looking forward to Mass though.
We went out for lunch after that, but I ate pretty light because I felt a little unsettled.

The next day we were trying to get ready to leave. Laura and I took the little people over to Justin, where they sell every kind of western boot that you can imagine, and I got to pick out a pair of beautiful brown boots for Christmas. They are just wonderful! I love how they fit! 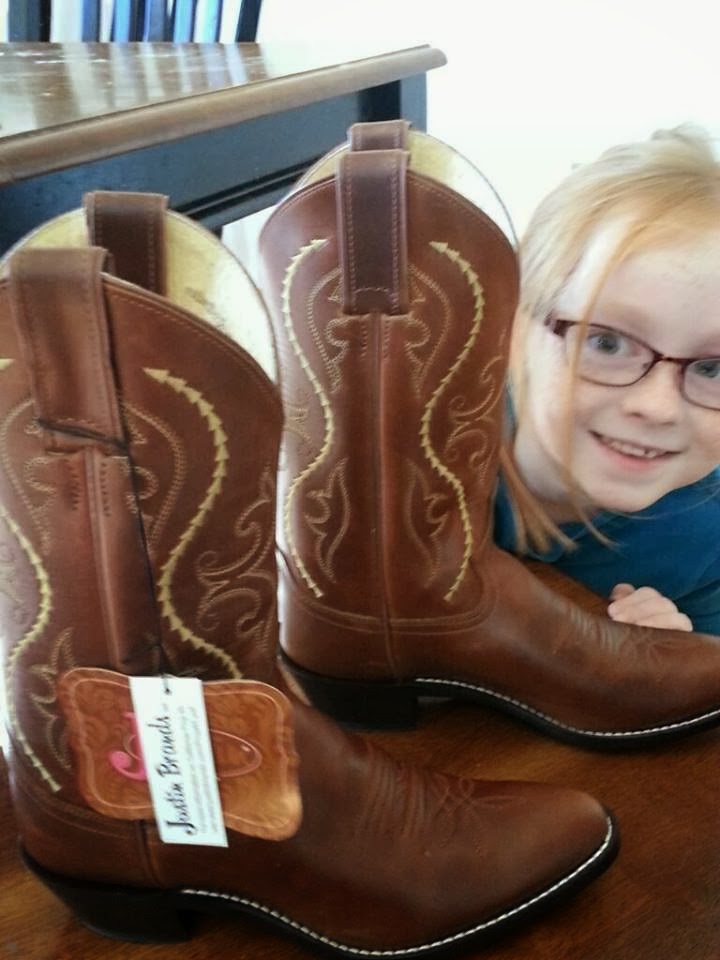 I was still feeling a bit grumbly in my stomach, and Laura said she was too. Still, on Thursday evening we finished packing and Laura and Andrew and I watched "The Help", which I hadn't seen, and really enjoyed. What a great story!

Friday morning-January 3rd- A day that will go down in family infamy.
We finished packing the car, loaded Maggie into her kennel, and had good-bye hugs all around. We headed out at around 9:00 am. The weather was great, and the way I chose passed around Dallas instead of heading into it, so traffic was really light. Nice.

We got through Arkansas during the day, and only stopped a couple of times. We wanted to take pictures with "Ruthie",
Lilly's American Girl doll. Ruthie was left in Texas by accident, and we wanted to show her a good time. 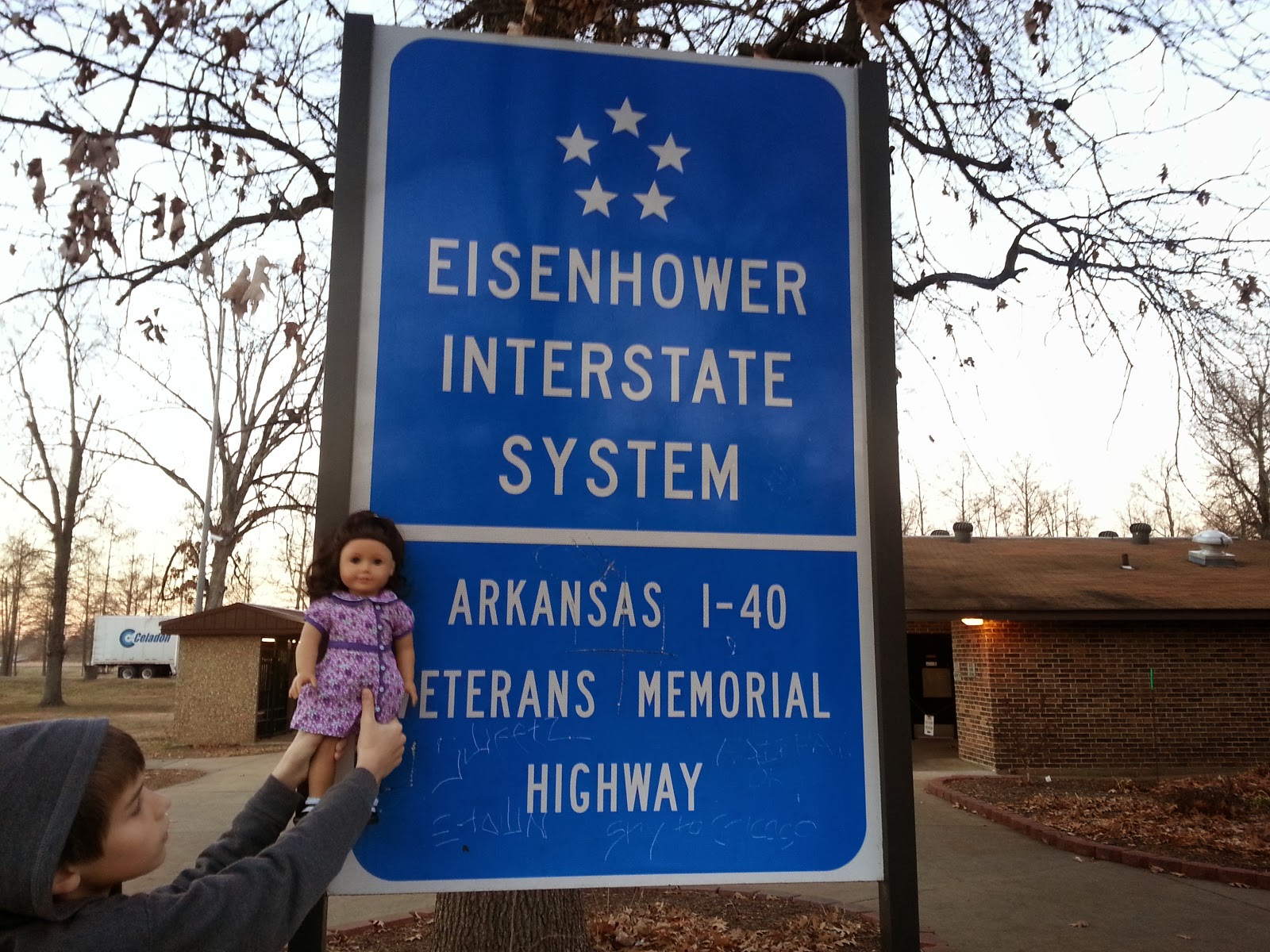 We stopped for lunch at a Chick-Fila that was in a mall, and John held out for Arby's. After that we decided not to stop until dinner, and I really wanted Cracker Barrel. I wasn't really hungry though, and it occurred to me, as I drove, that my digestion wasn't quite as usual, so I thought I would eat rather light.

After dinner we hit the road again, heading for Lebanon, TN.
John was complaining that he felt uncomfortably full, and I was feeling increasing pain in my stomach. I prayed really hard that it was just going to pass, or at least wait until we got to our hotel, but John said he really needed a bathroom, so we stopped. I barely made it into the bathroom at that little store. If we hadn't stopped, I would have been pulled over on the highway, being sick on the side of the road. I never want to repeat that experience again.
It bought me enough time to get the rest of the way to the hotel, but I again barely made it. John was a huge help in getting us all into the hotel and getting the stuff inside, but he was feeling so lousy! I felt so bad, because I was so sick that I couldn't do anything to help him.
He finally gave in at around 12:30 am.
Suffice it to say that the La Quinta in Lebanon, TX may never want us to stay there again. They are wonderful and we really like staying there, and we are very sorry. I told them that I had cleaned up an best I could, and that I was willing to pay an additional cleaning fee.
I was so incredibly sick and shot down, that I was afraid to drive, and I hated to take John out, as sick as he was. This bug is SO hard on you. I had been watching the weather, and so had Tim, and there was a big cold front coming in, from the west, and it was supposed to rain, so there was a really big chance for ice on the roads at the higher elevations. That cold front chased me out to the car, and we got going. Tim called around, because I knew there was no way I could drive all day without falling asleep. He found us a Quality Inn, in Salem, VA, that would take us, and Maggie. Maggie has been such a trouper on this trip.
We only stopped a couple of times, once for food for Brendan and Paul, and once for me to take a short nap, so that we could stay on the road. It was so miserable.
We finally stumbled into Salem and found the hotel. I got some bananas and Jello at a Walmart, so that John could eat something, and we just literally fell into bed.
We slept for 12 hours.
I woke up to Nina calling to tell me that the ice on the roads in Havre de Grace was really wicked, and begging me not to drive. I called Tim and we discussed our options. There was a bubble of warm air that we could ride through if we left right away. We checked out and loaded up and got going again. This time we only had about five hours of driving. I was rested, and only feeling a little yucky.
We saw a little slush on the bridges in the mountains in VA, and there was some ice dripping from the signs, but the roads were mainly just wet. I watched the trucks, because I know those guys are well informed about road conditions, and they were scooting along at 75 mph, so I figured we were on solid pavement.
We were SO glad to get home! It had been a harrowing couple of days. Really.
Tim was here, the house was warm, and we just fell into it.
We are taking another day off school to recover. The older guys are still sleeping, and they need it. They were such good sports about the whole thing.
This was a tough trial, but we made it through, and now I am praying that that was the big one for the year.
We had many people praying for us on the way, and for that I am very grateful.
Thank You Lord for family and friends. That is the lesson that I am taking from all of this.
As we were traveling I learned that one of our dearest parishioners was dying, and that one of the young families in our TORCH group had had their house horribly damaged by fire. I offered our experience up for them. We prayed a Rosary. God is good. All the time.

Posted by Jennifer Merkel at 11:05 AM