Here are a few pictures from the last few days.

On Monday night Tim and I went out to dinner for his birthday. We went to one of our favorite restaurants, and since Paul was at rehearsal, we didn't need a babysitter!
It's a new experience for us to be able to leave the two older boys at home and go out together.
It's nice, but a bit strange.
Anyway, we really don't worry about them getting in trouble while we are out. They are just very reliable.
So, John called my cell and wanted to know if he could find any modeling clay around. I think he was inspired when he watched "Close Encounters" the other night. He said he wanted to make "Devil's Tower". I must trust them a LOT, because later on the thought occurred to me that the permission to build something like what the guy in the movie had made could really be a disaster in my basement!
Well, I told him where to find it, and we went back to our evening alone.
Later he called and said that he had given up on "Devil's Tower".
He had made a brain instead and stuck it on a plate with a fork in it and called it "Thought for Food". Pretty catchy title. I really wish he had saved it...

He ended up using the clay over and made this. 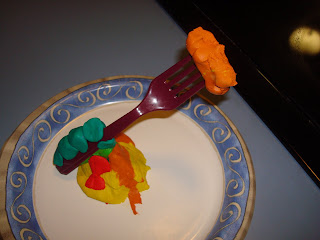 It's called "Self Indulgence". Food eating itself.


Brendan made a muscle man. 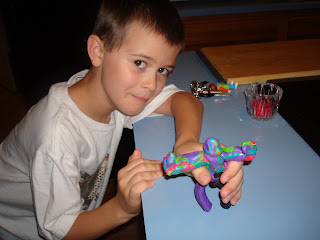 So this was art at our house on Monday...


Last night a bunch of the moms from our TORCH group got together and had our end-of-year reviews here at our house.
We had a rip-roaring storm just before everyone was supposed to show up, and so it was a little dicey, what with several families losing power.

Everyone did make it though and we had such a great night!

We ordered Chinese food, and while we were waiting for it to be delivered, we sat down and set out all the boxes and bins that everyone had brought.
There were some really beautiful projects. Some of the kids have really done some beautiful work this year. 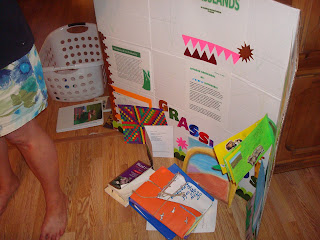 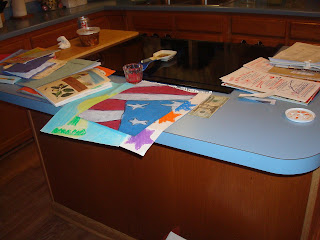 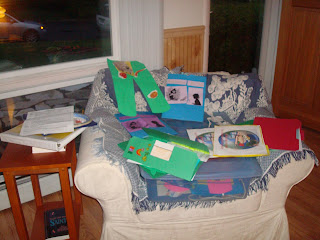 We all got to see what the kids have been up to and get ideas for next year. It's so nice to have these wonderful women to share with. Our reviews are so encouraging and uplifting. It's challenging to get through the year and sometimes we are really up against some tough circumstances. Some of the kids have learning issues, and there are some families that have faced other things that I can't begin to imagine schooling through, and yet they were here, they had persevered and they had these wonderful projects to show for it. . This is an inspiring group of women and I am so honored to be a part of it.

We shared what our kids had done and then each of us was signed off by one of the other moms.
My forms are all signed and ready to go.
Time to start gearing up for next year!
Posted by Jennifer Merkel at 1:49 PM

Email ThisBlogThis!Share to TwitterShare to FacebookShare to Pinterest
Labels: Homeschooling