The latest addition to our little "Cloud of Witnesses" 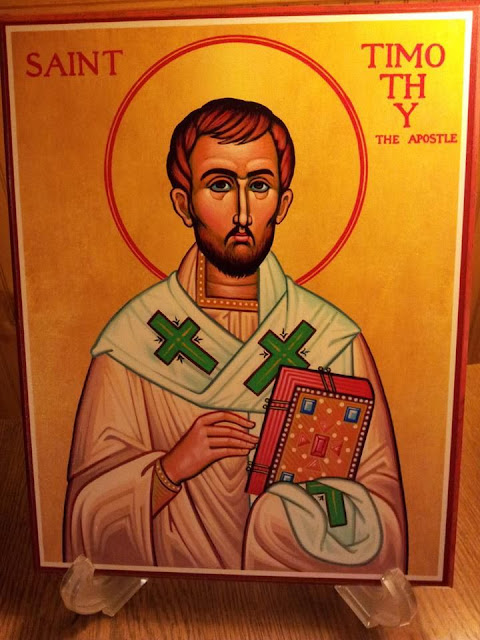 From Wikipedia~
Saint Timothy is mentioned in the Bible at the time of Paul's second visit to Lystra in Anatolia, where Timothy is mentioned as a "disciple". Timothy's mother was "a Jewish woman who was a believer" but his father was Greek, that is not a Jew. Timothy had not been circumcised, and Paul now ensured that this was done, according to the text, to ensure Timothy’s acceptability to the Jews they would be evangelizing to.[4] According to McGarvey[5] Paul performed the operation "with his own hand", but others claim this is unlikely and nowhere attested.[citation needed]
Timothy accompanied Paul for the next few years, traveling with him through Phrygia and Galatia, and into Europe to Philippi andThessalonia, and was sent back to the latter city to aid the congregation there, to rejoin Paul in Corinth where he aided Paul in evangelizing that city. Timothy next appears in Acts during Paul's stay in Ephesus (54-57), and in late 56 or early 57 Paul sent him forth to Macedonia with the aim that he would eventually arrive at Corinth.[6] Timothy arrived at Corinth just after 1 Corinthians reached that city. The letter was not well received, and Timothy quickly returned to Ephesus to report this to Paul. Timothy was with Paul in Corinth during the winter of 57-58 when Paul dispatched his Letter to the Romans.[7] According to Acts 20:3-6, Timothy was with Paul in Macedonia just before Passover 58; he left the city before Paul, going ahead of him to await Paul in Troas.[8] "That is the last mention of Timothy in Acts," Raymond Brown notes.[9]
His relationship with Paul was close. Timothy's name appears as the co-author on 2 Corinthians, Philippians, Colossians, 1 Thessalonians, 2 Thessalonians, and Philemon. Paul wrote to the Philippians about Timothy, "I have no one like him."[10]
His mother, Eunice, and his grandmother, Lois, are noted as eminent for their piety and faith,[11] which indicates that they may have also been Christians. Timothy is praised by Paul for his knowledge of the Scriptures (in the 1st century mostly the Septuagint, see Development of the New Testament canon#Clement of Rome), and is said to have been acquainted with the Scriptures since childhood.[12]
That Timothy was jailed at least once during the period of the writing of the New Testament is implied by the writer of Hebrews mentioning Timothy's release at the end of the epistle. It is also apparent that Timothy had some type of stomach malady, owing to Paul's advice in 1 Timothy 5:23, counseling Timothy to "No longer drink water exclusively, but use a little wine for the sake of your stomach and your frequent ailments."
Paul commanded Timothy to remain in Ephesus (1 Timothy 1) "I command you to stay there in Ephesus" to prevent heresy from infecting the church in Ephesus. Paul also gave Timothy instructions for establishing Elders and Deacons there. These very guidelines have become the commonly used guidelines among churches across the world to this day. According to later tradition, Paul consecrated Timothy as bishop of Ephesus in the year 65, where he served for 15 years. The later apocryphal Acts of Timothy states that in the year 97 (with Timothy dying at age 80), the bishop tried to halt a pagan procession of idols, ceremonies, and songs. In response to his preaching of the gospel, the angry pagans beat him, dragged him through the streets, and stoned him to death. In the 4th century, his relics were transferred to the Church of the Holy Apostles in Constantinople.

Rembrandt's Timothy and his grandmother, 1648.
Timothy is venerated as an apostle, saint and martyr by the Eastern Orthodox Church, with his feast day on 22 January. The Roman Catholic calendar of saints venerates Timothy together with Titus with a memorial on 26 January.

Posted by Jennifer Merkel at 9:23 AM