Welcome to the new kids...

I just had to post this real quick tonight.
We added some new members to the family today, and considering the species, I thought it prudent to welcome them as soon as possible. It may be a short stay.

Anyway, John had been noticing that Brendan was constantly talking about fish. He wants to do his bedroom in an ocean theme, he wants to visit the Aquarium, he has been asking all kinds of questions about fish! So, since John had some allowance saved, he decided to give a gift of a goldfish to Brendan, and since he didn't want the fish to be lonely, and since these particular fish are EXTREMELY affordable, he thought he should get one for Paul too. The fish are cheap, the setup is not, really. So it cost him all of his allowance, plus some of mom's funds, to outfit these little guys for his brothers. This may have gotten me into even more trouble, as now Brendan says he wants a complete aquarium for his birthday.
Paul wanted a gold and black one, and Brendan was taken with the beautiful white and orange.

So, without further ado, may I present:

Cody and Sparkla. Proudly named by their respective owners, Paul and Brendan. 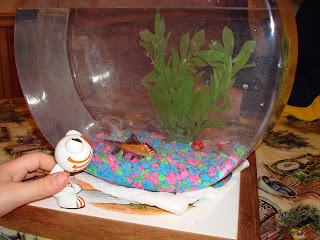 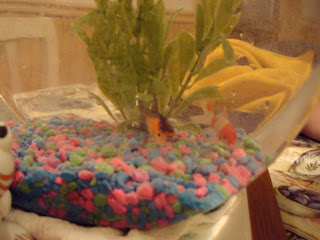 Posted by Jennifer Merkel at 10:51 PM

Email ThisBlogThis!Share to TwitterShare to FacebookShare to Pinterest
Labels: Family

Well, welcome to the new members of your household. May they thrive on all the attention they get - remember, go light on the feedings!!
John, you were so nice to treat your brothers like that. You are a super big brother to them.
Love you,
Grandpa and Grandma

Oh my gosh! That is the sweetest thing ever...how do I get MY boys to be that kind to each other????

AND..Dylan won a goldfish at a fair 2 1/2 years ago and it is STILL alive!! I looked up the world record for a goldfish life and it is 43 YEARS!!!! LOL