Something Worth Thinking About... 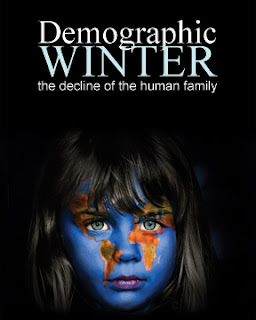 Demographic Winter: "Schools will be turned into nursing homes. Playgrounds will become graveyards."

WASHINGTON, DC, January 26, 2009 (LifeSiteNews.com) - Celebrated columnist and pro-family leader Don Feder gave a jaw-dropping presentation on the coming 'Demographic Winter' at the Rose Dinner which closes the official March for Life festivities every year. Speaking to hundreds of attendees, Feder suggested that the demographic problem of worldwide declining birthrates "could result in the greatest crisis humanity will confront in this century" as "all over the world, children are disappearing."

"In the Western world, birthrates are falling and populations are aging," said Feder. "The consequences for your children and grandchildren could well be catastrophic."

Feder noted, "In 30 years, worldwide, birth rates have fallen by more than 50%. In 1979, the average woman on this planet had 6 children. Today, the average is 2.9 children, and falling." He explained the situation noting, "demographers tell us that with a birthrate of 1.3, everything else being equal, a nation will lose half of its population every 45 years."

Beyond an inability to pay for pensions, it is likely that euthanasia will be one looked-to solution to the aging crisis, he said.

"Demographic Winter is the terminal stage in the suicide of the West - the culmination of a century of evil ideas and poisonous policies,'" he said. Among them he listed:

"Abortion - As I mentioned a moment ago, worldwide, we're killing 42 million people a year. It's as if an invading army killed every man woman and child in Italy - then repeated the process every year.

"Contraception - For the first time in history, just under half the world's population of childbearing age uses some form of birth control. Some of us remember when births weren't controlled and pregnancies weren't planned. With all the wailing about man-made Global Warming, carbon footprints and the ozone layer, wouldn't it be ironic if what did us in wasn't the SUV but the IUD?

"Delayed marriage. People are marrying later and later. After 35, it becomes progressively harder for a woman to have children.

"The decline of marriage and the rise of cohabitation. Not surprisingly, in relationships without commitment, people have fewer children. By the way, the left's contribution to the coming population crisis is to push the one type of ‘marriage’ (and I use the term advisedly) that can't conceivably produce children.

"But perhaps,” he concluded, “the most important factor is a culture (including Hollywood, the news media and academia) that tells people that children are a burden, rather than a joy; that pushes an ego-driven, live-for-the-moment ethic; a culture that tells us that contentment comes from careers, love, friendship, pets, possessions, travel, personal growth - anything and everything except family and children. It's a culture that can look at Sarah Palin and her beautiful family and ask why she had to have 5 children and why she didn't abort her child with Downs syndrome."

For more see the first documentary on the plummeting birth rate:

"Demographic Winter: the decline of the human family"
http://www.demographicwinter.com

Posted by Jennifer Merkel at 2:53 PM