The Feast of the Annunciation- March 25 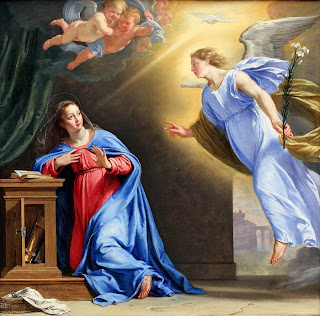 Gospel Reading: Luke 1:26-38
In the sixth month the angel Gabriel was sent from God to a city of Galilee named Nazareth, to a virgin betrothed to a man whose name was Joseph, of the house of David; and the virgin's name was Mary. And he came to her and said, "Hail, full of grace, the Lord is with you!" But she was greatly troubled at the saying, and considered in her mind what sort of greeting this might be. And the angel said to her, "Do not be afraid, Mary, for you have found favor with God. And behold, you will conceive in your womb and bear a Son, and you shall call His name Jesus. He will be great, and will be called the Son of the Most High; and the Lord God will give to Him the throne of His father David, and He will reign over the house of Jacob for ever; and of His kingdom there will be no end." And Mary said to the angel, "How shall this be, since I have no husband?" And the angel said to her, "The Holy Spirit will come upon you, and the power of the Most High will overshadow you; therefore the Child to be born will be called holy, the Son of God. And behold, your kinswoman Elizabeth in her old age has also conceived a son; and this is the sixth month with her who was called barren. For with God nothing will be impossible." And Mary said, "Behold, I am the handmaid of the Lord; let it be done to me according to your word." And the angel departed from her.


The Annunciation
The Feast of the Annunciation, March 25, is one of the most important in the Church calendar. It celebrates the actual Incarnation of Our Savior the Word made flesh in the womb of His mother, Mary.

The biblical account of the Annunciation is in the first chapter of the Gospel of Saint Luke, 26-56. Saint Luke describes the annunciation given by the angel Gabriel to Mary that she was to become the mother of the Incarnation of God.

Here is recorded the "angelic salutation" of Gabriel to Mary, 'Hail, full of grace, the Lord is with thee" (Ave, gratia plena, Dominus tecum - Lk 1:28), and Mary's response to God's will, "Let it be done to me according to thy word" (fiat mihi secundum verbum tuum) (v. 38)

This "angelic salutation" is the origin of the "Hail Mary" prayer of the Rosary and the Angelus (the second part of the prayer comes from the words of salutation of Elizabeth to Mary at the Visitation).

The Angelus, a devotion that daily commemmorates the Annunciation, consists of three Hail Marys separated by short versicles. It is said three times a day -- morning, noon and evening -- traditionally at the sound of a bell. The Angelus derives its name from the first word of the versicles, Angelus Domini nuntiavit Mariae (The Angel of the Lord declared unto Mary).

Mary's exultant hymn, the Magnificat, found in Luke 1:46-55, has been part of the Church's Liturgy of the Hours, at Vespers (evening prayer), and has been repeated nightly in churches, convents and monasteries for more than a thousand years.

The Church's celebration of the Annunciation is believed to date to the early 5th century, possibly originating at about the time of the Council of Ephesus (c 431). Earlier names for the Feast were Festum Incarnationis, and Conceptio Christi, and in the Eastern Churches, the Annunciation is a feast of Christ, but in the Latin Church it is a feast of Mary. The Annunciation has always been celebrated on March 25, exactly nine months before Christmas Day.

V: The Angel of the Lord declared unto Mary

R: And she conceived by the Holy Ghost.

V: Hail Mary, full of grace: The Lord is with thee. Blessed art thou among women and blessed is the fruit of thy womb, Jesus.

R: Holy Mary, Mother of God: Pray for us sinners now and at the hour of our death. Amen.

V: Behold, the handmaid of the Lord.

R: Be it done unto me according to thy word.

V: And the Word was made flesh

R: And dwelt among us.

V: Pray for us, O holy Mother of God,

R: That we may be made worthy of the promises of Christ.

All: Pour forth, we beseech thee, O Lord, thy grace unto our hearts, that we, to whom the Incarnation of Christ, thy Son, was made known by the message of an Angel, may by His Passion and Cross be brought to the glory of His Resurrection, through the same Christ, our Lord, Amen.

Posted by Jennifer Merkel at 9:01 PM