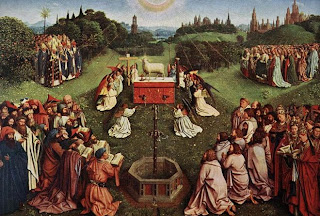 Today is Holy Thursday.
We have taken the day off our usual school to spend time thinking and learning about what happened on this day in the Life of Christ.

Before we go to Mass tonight to celebrate the Last Supper, I want to give the boys a better understanding of what the Passover meant to Jesus and His Apostles. I want them to understand that Passover was always the prefiguring of Christ's Last Supper and the final covenant, the Sacrifice of Christ on the Cross and His triumph over death. He is the Lamb that was slain and when we receive His body, we participate in the final Passover.

In some excerpts from his talk, Scott Hahn puts it like this:

The Eucharist as The Lamb's Supper

from a talk by Scott Hahn

One of the most important ways that the Old Covenant foreshadows the New is in its use of the image of the sacrificial lamb. Let's see how this relates to the Eucharist in Scripture.

First, take a look at Revelation 5. In Revelation 5, there is a scroll with seven seals that nobody can break open and everybody is really upset. In fact John almost begins to cry. In 5, verse 2, "A strong angel proclaimed with a loud voice, 'Who is worthy to open the scroll and break its seals?' And no one in heaven and on earth or under the earth was able to open the scroll or to look into it." What is the scroll? The word is biblion. Most likely it's a reference to a covenant document, the New Covenant document that nobody is worthy to break open. "And I wept much, but no one was found worthy to open the scroll or to look into it," because this scroll would consummate and fulfill the promises of the Old Testament.

"Then one of the elders said to me, 'Weep not. Lo, the Lion of the tribe of Judah, the Root of David, he has conquered so that he can open the scroll and seven seals.'" You could almost feel the hallelujah rising up from within your soul. The Lion of the tribe of Judah! You turn. You look and John turns to look and what does he see in verse 6, " And between the throne and the four living creatures and among the elders I saw," what? Aslan, the lion? No. David crowned with glory? No. You'd think so, a lion and a king are the words used to describe it. "I turned and I saw a lamb standing, looking as though it had been slain."

Jesus Christ is the son of David and the king of the new and heavenly Jerusalem. He is the Lion of the tribe of Judah and He is the Lamb of God, slain from the foundation of the world, as it said elsewhere in Revelation. But here in heaven on the throne of glory, after His crucifixion, Hs resurrection, His ascension, His enthronement, He still looks like a lamb. He still looks as though He had been slain. Why not clean up the body? Why not wipe away the wounds? Why continue resembling a lamb? Because He's continuing the Passover offerings, the sacrifice. Not by dying, not by bleeding and not by suffering but by continuing to offer up Himself as the firstborn and as the unblemished lamb, as the perpetual, timeless, everlasting sacrifice of praise to the Father....

...Now, is this strange? Is this teaching novel? Well, let's take a look at 1st Corinthians and see how natural it seems to the apostle Paul. We have already looked at 1st Corinthians 5, "Christ, our Passover," that's in verse 7, "Christ, our Paschal Lamb has been sacrificed. Let us therefore celebrate the festival not with the old leaven, the leaven of malice and evil, but with the unleavened bread of sincerity and truth." What's he talking about? Is he talking about leaven being like sin. No. He's saying let us celebrate the feast with unleavened bread. What feast? The Eucharist! The sacrifice continues because communion must be celebrated. We've got to eat the lamb, the resurrected, glorified, enthroned lamb that still looks as though he'd been slain because he's still giving himself to us....

..... Paul goes on to say, Corinthians 11, as we will see, how Christ's death is proclaimed. Take a look with me at 1st Corinthians, 11:23-26. "For I received from the Lord what I shall deliver to you." Interesting, he received it not from Peter and the apostles. When Jesus appeared to Paul on the road to Damascus or perhaps at some other time, what did Jesus deliver to Paul? Instructions for the Eucharist. "I received from the Lord what I also deliver to you. That the Lord Jesus Christ, on the night when He was betrayed, took bread, and when He had given thanks, He broke it and said, 'This is my body, which is for you. Do this in remembrance of me.' In the same way also the cup after supper saying, 'This cup is the New Covenant in my blood. Do this." Commandment, imperative tense. "As often as you drink it in remembrance of me. For as often as you eat this bread and drink the cup, you proclaim the Lord's death until He comes."

.....Many non-Catholic as well as Catholic scholars have noticed that the whole structure of Revelation is a big Passover liturgy where Christ, the Priest King, the firstborn Son and the Lamb looking as though it's been slain conducts and celebrates the heavenly liturgy. And the earthly liturgy is meant to be a reflection in that, a participation in that, and the early Church took it for granted. There is the Lamb looking as though it's been slain and making all of the people in heaven priests so they can assist in the offering of the firstborn son of God to the Father and join themselves with it.

I love the way he explains the connections between the Old and New Testaments and between the here and now and what is foreseen in Revelation. We are all part of a beautiful Liturgy, from our baptism into Eternity.

Have a wonderful Holy Thursday!
Posted by Jennifer Merkel at 10:40 AM