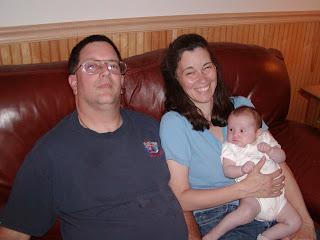 Several weeks ago I was praying at Mass.

Life was getting so crazy and I had been feeling like I was so focused on everything that had to be done and all that I was committed to, that I wasn't being at all the wife to Tim that I want to be. I was praying that God would give me a better appreciation of my marriage and my husband.

So, just let me give you a little advice. If you are in front of Jesus at Mass, and you ask Him for something, think about what you are really saying...He WILL answer.
A couple of days later, Tim calls from the doctor's office. I didn't know he had made an appointment.
I knew he had been having trouble with a hernia... again...
These just seem to plague him about every two years, and he gets them fixed and life goes on.
What I didn't know was that he had some other, more serious, concerns. He hadn't wanted to worry me and so hadn't told me about what was going on.
So, when he called from the Surgeon's office to tell me that he had a date for a hernia repair and a colonoscopy, I was a little worried. When he finally told me why the colonoscopy had been ordered, I was very worried.
And when I worry, I don't just get a little uptight. God knows how I am. He knows what I think about when I am worried. He knows that I imagine the worst. That I think about what life would be like in the worst case. He knows that I can't think about much else and that I become very aware of every detail of the object of my concern. This situation fit His purposes perfectly.

So for about two weeks, I was waiting for news. I did a lot of thinking and a lot of praying and I really got a chance to examine my loves, obligations and priorities. I had been so wrapped up in obligations and what needed to be done to fulfill them. Loves, especially my Love, tend to be willing to take a back seat to obligations. Tim is never whiny and never complains when I over commit and then freak out and unload all my frustrations. He has been incredibly patient with me and all my "stuff" this past year. Meetings, work, phone calls, etc. He gives and gives, and I just keep forging ahead.
I got lost in those details. Around all the "stuff" I kept thinking that this wasn't how I wanted my marriage to be, but there was no definite point at which I was called to rein in the outside activities and look critically at myself as a spouse. I'm not saying we were in trouble. I would have noticed that. I'm saying that I was giving a lot of attention to all the squeaky wheels and Tim, who is never squeaky, was getting way too little.

The surgery went well. The colonoscopy was also a source of good news. Apparently, the issues that could have been caused by something scary are probably the result of a medication that has some rather odd side effects. Tim is very sore and moving very slowly, but he is moving. It would be good to figure out how to avoid another hernia, so we will work on that.

I'm still involved in all the same activities. I am still over committed, but I know now that I have to scale back. I know that God listened to me, and now I have to listen to Him.
I either have to be less concerned with the details of my various outside activities, or I have to pass them on to someone else. It's so true that we need to be the most focused on the things that are put into our lives to get us to Heaven. Tim was put in my life as a helpmate and a gift. Our marriage is Sacramental. The other things that want my attention are secondary to my family and even the most worthy of my outside concerns is not to be put above my family relationships.
This has been driven home to me over and over in homilies, confession, things I read and now, finally in what could have been a life changing event. There isn't time to say "I'll get to that later". I am blest that there is going to be a later. I know people who don't get one. Now is the time to take hold of the blessing of life together and make the most of it.
I also need to fill up the time we do have in richer and more positive ways. Like more time praying together.
Life will always get in the way of what's important, until we run out of it and we realize that what we thought life was was really just "stuff" and what Life really is, well, it's a who, not a what.
Posted by Jennifer Merkel at 9:04 AM

Email ThisBlogThis!Share to TwitterShare to FacebookShare to Pinterest
Labels: Family

I am so glad the surgery and tests went well! I will also follow your example and tend to my loves more than the schedule and tasks at hand. Thanks for the reminder.