Monday Breathing Down my Neck!

It wasn't quite as relaxing as I had hoped, but we did have a nice Sunday.
The boys had asked if they could sleep in the living room floor last night, for some reason.
I guess the novelty of sleeping anywhere other than their rooms must have made the hard floor worth it.
Needless to say, Brendan was up at the crack of 7:00, while Paul slept in until 7:30.
John, having commandeered the couch for the night, slept until 8:30.
Anyway, we got going and Tim got the last bits of the room finished. I do have to get pictures posted.
We headed off to Mass, in the cold. February is the most confusing month!
A few days ago it was 65 degrees out and now it feels like it could snow again.

After we got home, I just wanted to sit and read!
I am reading another James Patterson novel, "Cross Country". 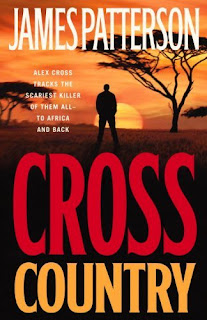 It's a story about Alex Cross investigating a series of murders, which leads him to Africa. The way Patterson describes the African Countries of Nigeria, Sierra Leon, and Darfur, in Sudan, it boggles the mind that people can survive such a lifetime of misery. According to the author, the political chaos, war, and suffering waged by warlords that are nothing more than gang leaders and thugs is beyond anything that I can imagine. I want to read about his research and the "story of the story".

So I read for awhile, and then I had to get dinner put together, because Lilly was coming at 3:00. I wanted to have it ready to bake before she came. Much more relaxed dinnertime that way.
I made a Baked Ziti. I found a great recipe and wanted to try it. It's posted on my other blog. It makes enough for an army.
Lilly just kept eating and eating! She'd get through the pile on her tray and then she'd throw out her arms and yell for more.

We had a lot of fun with her tonight. That girl does love to sing and dance!

I am hoping for a call from Laura. You never know when that little girl might decide to make an appearance! Laura says she is feeling really achy and crampy, which is to be expected, but it also makes me hopeful that it won't be much longer.
I can't WAIT to meet that little girl!
Posted by Jennifer Merkel at 8:20 PM