Argghhh!
I missed four days!!
Dang. It's only January.
Well, it's been pretty busy around here. On Tuesday I went down to Fr Henry's to work on putting away his Christmas things.
So. Many. Things. It really is a two man job now, and Tim wasn't able to help me. Next year I will wait until he can come down. Fr sent me home with a couple of boxes of books, and I kept a few to read myself and then will pass them along.

I made the most amazing Carne Picada! That's a win that is going to happen again! 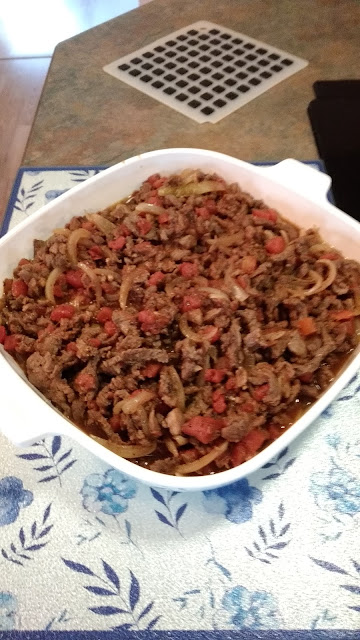 Wednesday I went to Mass and then to a fundraising meeting. We had our small group after that and a great discussion! It was a full house!

Thursday I went to Kimies and it was my turn to make them a meal so I put together some Chicken Enchiladas. I made Cornbread too, but it burned, which was a bummer.

I have been reading "The Brothers Karamazov" furiously, because we had our first book discussion coming up.

So Friday, yesterday, I went to Mass, as usual and then came home to read. I got almost to where I needed to be! I got caught up in a couple of things and so I didn't have all day to read.  I went down to the study and we had such a great discussion! These kids are sharp! I am just loving this book! The story is so well crafted.

I had to leave a little early to get to Adoration at 4:00, and when I got there, there was a Pro-Flowers box on the sign-in table.
It was address to someone, but the address was the one at the Chapel. We called the company, but they said that they would take care of it and just to keep the flowers! So my friend Diane opened them and arranged them and put them in front of the altar.
They are going to be gorgeous when they open up!
They are a deep blue, with white Lillies. The card was addressed to "Mom". So we gave them to our Mom, Mary.

I will take a picture on Monday, when they have bloomed.

Today has been a bit frustrating but a quiet day at home, for the most part.
Somehow I have lost the plug-in box for my phone charger and the phone really doesn't charge any other way. So I had to run out to see if I could find one. No luck. I had to order one on Amazon.
Should be here tomorrow. Ugh.
Tim put the headboard on the bed, but it is too wide, so it can't be attached the way it is supposed to be. He made it work, but it messed up on the measurements and that is annoying.
It is really pretty and it matches the wood in our room perfectly! 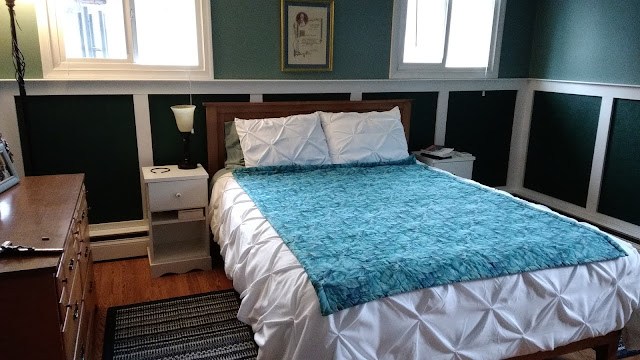 Tonight we are going to Mass, and tomorrow to the Football Frenzy at St Patrick's.
Should be a really fun day!
I'll be sure and get lots of pictures for that.

Posted by Jennifer Merkel at 1:58 PM