Today was a pretty low-key day.
I took Nyquil last night, so I woke up really late, however, it was a good choice, because while I still have a rip-roaring cold, it is just a cold, and not the flu, and I can live with that.
I have to leave tomorrow for my TOB course, and I have been so worried that I was going to get really sick. I am moderately sick. I'll take it.

It was rainy and dreary off and on all day, but not really cold. I'll take that too.
I got through most of the laundry, returned something to Amazon, and got myself packed.
I also got a walk on the treadmill in. I think that really helps to boost the immune system.

I started this book. I was really glad it came beofre I left, because I am on a schedule and I need to take it with me. I am still reading the introduction, and it is really interesting. I love this translation. 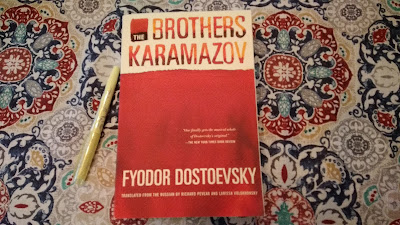 And Stirling was enjoying the fact that I put Maggies bed under ours. He loves sleeping on it, and having it under there is just even better, because he feels like he is being sneaky. He loves being sneaky. 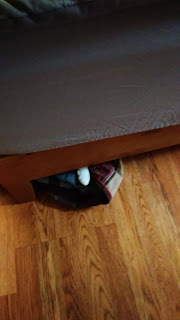 So I am winding down with a little football. Wild card games.
The Buffalo Bills looked good to win against the Houston Texans, but the Texans have pulled ahead.
...and...now they are in overtime 19 to 19. This hasn't happened in a wildcard game since 2011.
...and...the Texans won with a field goal!

I am just really hoping that our Ravens make it to the Superbowl. They have worked so hard!!

Posted by Jennifer Merkel at 9:09 PM